Tiana and Her Ambition 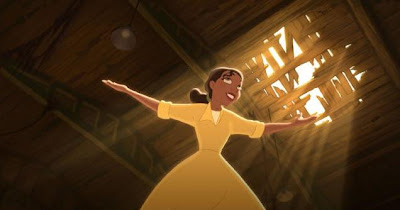 Maybe I can say she's stubborn. She won't listen to you when you give advice to her. But, from different perspective, I can say she has a super strong conviction. Well, at least that's a good point.

In the end of the story, somebody finally could change her mind. A frog, well, cursed prince I mean, named Naveen met Tiana and had a long journey with her. From that journey, Tiana learned lots of things, until she realized she just can't focus on that one thing only. She needed something else. It's not because that one thing was wrong, But she learned, when she focused on that one thing, it didn't mean she should ignore other thing.

In this case, Tiana focused too much on her dream to make a restaurant. It was really her dream. Her mom told her that she worked too hard, but she didn't care. She felt like she knew everything she wanted, and she would do anything to get that thing. I'm sure it was not easy to change Tiana. She was always strong with her conviction at the first time. But, because an unexpected thing happened and she had no choice, she finally had to change her plan for a while. In that time, she realized restaurant wasn't only one thing she should reach. She needed love.

It's good to be focused and organized. But, when you're too focused on one thing, it's like you don't care about other things. The fact is, what you focus on isn't always the most important or the best thing. It's like you decide to be a close-minded person who doesn't want to know any other thing, because you feel like you know everything you want and everything you need.

Too much focus on one thing makes you can't see other things, which may be better than that 'one thing'.

Popular posts from this blog

February 09, 2015
Valentine's day is coming soon, and it's the day of love. I think it's a great idea to share something related to love: Love Languages . Have you heard about it before? It's not my idea. It's Gary Chapman's, but I'm excited to share it with you! I've shared it with people around me all this time, making sure they know about this amazing idea. And the exciting thing about love languages is, it's applicable not only for your life partner, but also for everyone around you, including your parents, friends, coullages, and every single one you know. I once wrote, " Life is always about love, but love is not about him or her all the time. " So don't worry, whatever your status is right now, it can be fun for you too! Let's explore about love! Okay. What's love languages? Basically there are five love languages, and one person has one dominant love language. The fun is in finding out the dominant love language in people you care ab
Read more

October 04, 2012
One of people who inspire me the most is Nick Vujicic . I believe many of you know about this man. If you don't, well, he's a man with no arms and no legs. Although he has this disability, he still lives his life to the fullest. He swims. He surfs. He married. He does whatever he wants. Even he inspires many people around the world with great stories about his amazing life. Isn't he really a huge inspiration? I'm sure you know what I'm gonna write here. Many things we can learn from him, like being thankful, enjoying life, creating your happiness, or living the life you want no matter what the circumstance is. But I want to talk about his great life from a little bit different thing. He inspired me in one thing when I read his book. If there's one thing I can learn from him, it's that you can't always change your problems, but you can always change the way you see it . You can't always change your problems, but you can always chang
Read more

You are what you eat

June 09, 2011
You know they say, you are what you eat . I totally agree with this saying. The phrase finder says its meaning is "To be fit and healthy, you need to eat good food ". But I guess it's more powerful than that. I personally assume that the "food" here is more about things we put into ourselves, such as what we see, what we think, or what we feel . Just everything we put into ourselves . So, if this world was a restaurant, everything you can see, think, and feel in this world would be the foods. And the main role here is you! Because you would be the customer in the restaurant who choose the foods you want to eat. Whatever you eat, it will always affect your body (your life). That's why it's really important to choose "what you eat", because it's what really shapes you in the end. If you want your life to be better, you should manage what you eat. You can't just consume whatever you see, because not everything you see is
Read more

wilzkanadi
The bad news is, your life will never be perfect. The good news is, you don't need a perfect life to be happy and make it worth living. Be grateful. Enjoy life.